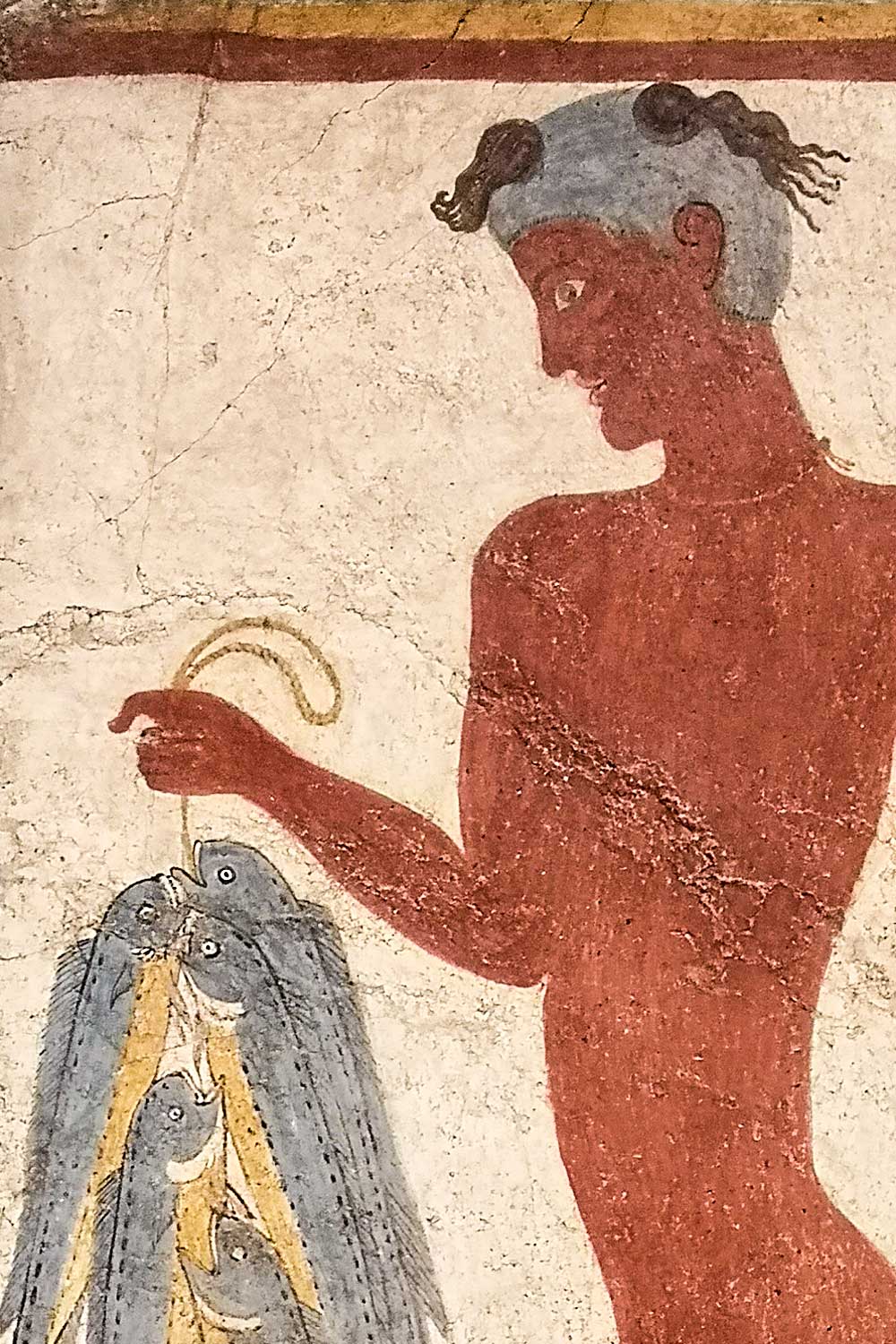 Yesterday, with great satisfaction, I graduated in Cultural Heritage at UTIU in Rome. I can therefore dedicate this day to pleasure by visiting the exhibition at the stables of the Quirinale “Pompei and Santorini”, thanks to the ticket kindly given to me for the occasion by Elena (“my” Lady Akrotiri). I had planned this visit few months ago, I must recognize that the promotion on social networks and the billboard campaign in Rome were designed with care.

The curiosity is due, in addition of course to the extraordinary opportunity to see many finds from the Museum of Prehistoric Thera, to understand how the curators have managed to combine two complex sites such as Pompeii and Santorini, as well as modern and contemporary art. The challange is not at all simple, and the risk of goofing is high. I mean: articles of alleged (and improbable) new Pompeii clog physical and digital newspapers, and I do not think that an eruptive disaster, or the vastness of an ancient site, is sufficient to justify these combinations.

In the space of a post it is not possible to talk about all the finds on display, and I will focus (very partially, in a Aegean-centric perspective) on the frescoes from Akrotiri, the settlement that stood on the southern coast of the island of Thera and which was sealed by famous eruption of LM IA (very debated absolute dating: around 1510 or about 1630 BCE). The city has a very ancient history dating back at least to the third millennium BCE. and, in its final phase before the disaster, it was characterized by a particularly prosperous economy oriented towards fishing and maritime trade. Artistic expressions and material culture were very influenced by the Minoans in Crete, but this appropriation of “external” cultural traits is implanted on a decisive local Cycladic substratum, and therefore seems the result of an internal process, likely linked to a precise choice of the richest and most influential groups of Akrotiri. To be clear: Thera’s frescoes are certainly not the same as those you can find at Knossos, although they share an evident taste that we could call “naturalistic”, a similar color palette and some figurative solutions.

Having quickly passed – at least me – the cast of a horse, we reach the first room called “the Time Machine”, where the infographics explain the two ancient sites from a historical and chronological point of view. In the center, once again two casts, but (the devil is in the detail) one is a contemporary work of Arturo Martini, but I am immediately kidnapped by some of Akrotiri’s most famous frescoes. Just a quick introduction which is also written in the easy, and much appreciated, guide they gave me at the entrance: it is necessary to remember the contexts from which the wall decorations come. In this room are hosted the remarkable fresco of the Adorants, from Xestè 3 – a structure probably of a mainly public destination – and the one depicting two ikria from the West House, mainly a private building.

The Xestè 3 was a large architectural complex, probably communal, divided into several floors and probably used for the initiation ceremonies, perhaps more distinctly feminine. The decorative program was vast and complex, and here on display it is obviously not appreciable as a whole (but an overall scheme would have been very helpful). The fresco of the Adorants is pertinent to the Room 3 (ground floor) divided through polythyra into two spaces, one of which with a lustral basin. The scene must therefore be contextualized in relation to and in dialogue with the entire cycle and, in particular, with the fresco that portrays a sacred architectural structure surmounted by consecration horns (not on display). In fact, the three female figures are likely to move in the direction of this sacred altar / enclosure, and they too can be more explained in the context of a ritual.

The extraordinary details of the rich clothing and jewels (such as the rock crystal necklace) immediately emerge, as well as the freshness of the strokes that seems to portray the details with immediacy. The central figure is portrayed sitting on a rocky landscape, and it is evident that she is in some way suffering / worried: one hand is brought to the head, while the other touches the foot where there is blood, the fluid that also occurs in other scenes .

The other fresco in the room, on the other hand, comes from the West House, a mainly private building (but other interpretations have been advanced, including a more ritual context), certainly belonging to a very important person, probably linked to the naval trade. In fact, two ikria are represented here, a sort of wooden canopies decorated with skins that were set up on the stern of the boats and associated with the command, as seems to be suggested by other representations also coming from the same building (the miniature frieze with naval scenes, not on show).

Continuing with the visit through the rooms dedicated to Pompeii and the eruptions, I pause to describe some of the works in Room 6 dedicated to Akrotiri’s daily life, obviously I’d like to begin with the splendid fishermen.

The frescoes of the Young Fishermen also decorated the West House, but were not in the same room decorated by the ikria seen above. Room 5 was in fact characterized by a rich decorative apparatus that covered all the portions of the wall free from windows and other architectural elements. At the two opposite corners of the room stood these two depictions of young nudes holding bundles of fish, apparently just caught. The particular hairstyle seems to be linked to the age of the two boys, and perhaps the scene alludes to rites of passage, such as fishing for vigorous fish such as those portrayed, which the young males had to face in order to access the next stage (see Koehl 1986 ; Girella 2018).

Another famous piece of the decorative apparatus of the West House is housed in the next room, dedicated to “aspects of the ritual and contacts with the rest of the world”. The miniaturistic frieze of Room 5 is difficult to interpret even if it seems clear the unfolding of a sort of story – perhaps of a journey, a war or a celebration – which features the sea and Akrotiri’s naval fleet, of which the boats of the same patron were probably part, as the frescoes of the ikria already seen above also seem to suggest.

On display there is “only” the fresco of the eastern wall, which seems almost a sort of excursus to the story that is depicted into the other walls that portray, as already mentioned above, scenes related to a journey by sea. In fact, this frieze shows a Nilotic landscape rich in plant and animal elements, even if the presence of a griffin could suggest a fantastic or sacred interpretation of the scene. The rendering of the details is very lively thanks to the use of bright colors, and the particularly fresh mood of the design also confers a sort of movement and dynamism to the entire scene.

On the other side of the room there is another fresco from the space connected to the lustral basin from which the Adorants (Xestè 3) also comes. It is interesting to note (Girella 2018) the presence of both male and female characters in the same environment, even if the former are concentrated in a specific separate space.

The scene actually includes more male figures in addition to the one present in the exhibition which portrays a young boy (note the hairstyle once again) holding up a large basin. In fact, in front of him there was originally a more mature male figure in the act of pouring a liquid from a large hydria, probably right inside the boy’s vase. Here also the interpretation is complex, but it seems linked again to rites of passage to adulthood.

I do not dwell on the following rooms since I wanted to focus here only on the Akrotiri frescoes, but the visit continues alternating ancient daily finds returned thanks to the catastrophes, modern and contemporary works.

I would like to underline a detail that I really appreciated: the attention to the youngest. During the visit, two groups of students were engaged in real-life drawing activities that alternated with an interesting guided tour; moreover, attracted by a volcano icon displayed near some works, I wanted to be accompanied by the audio guide for children for a second quick tour. Following the narrative voices (Nanò, a witty tribute to the archaeologists Marinatos, and Lilli, like the lily flower so widespread in Thera’s iconography) one is catapulted into a story that creates an interesting, and not at all obvious, path between a selection of exhibited works. Room 6 also suggests a fun (and safe) “treasure hunt” that stimulates the little ones to independently identify some important details on which the story is then developed, a strategy that actively and dynamically involves the young visitors.

Returning to the question initially posed about the combination of Santorini, Pompeii, modern and contemporary: it is really complex to propose this dialogue. Already the only “comparison” between the two ancient sites is very complex. However, I appreciated the (few) cases in which the works pertinent to different chronological horizons were proposed in a simultaneous and almost mimetic combination, losing that juxtaposition effect that I perceived, in some cases, during the visit. Perhaps a different key – maybe more complicated for the visitor because it is less didactic and not diachronicly ordered, but I think more courageous and full of ideas – could have been a “collection” approach more than an “exhibition” one, in order to promote a dialogue between contemporary works and ancient finds in the same room.