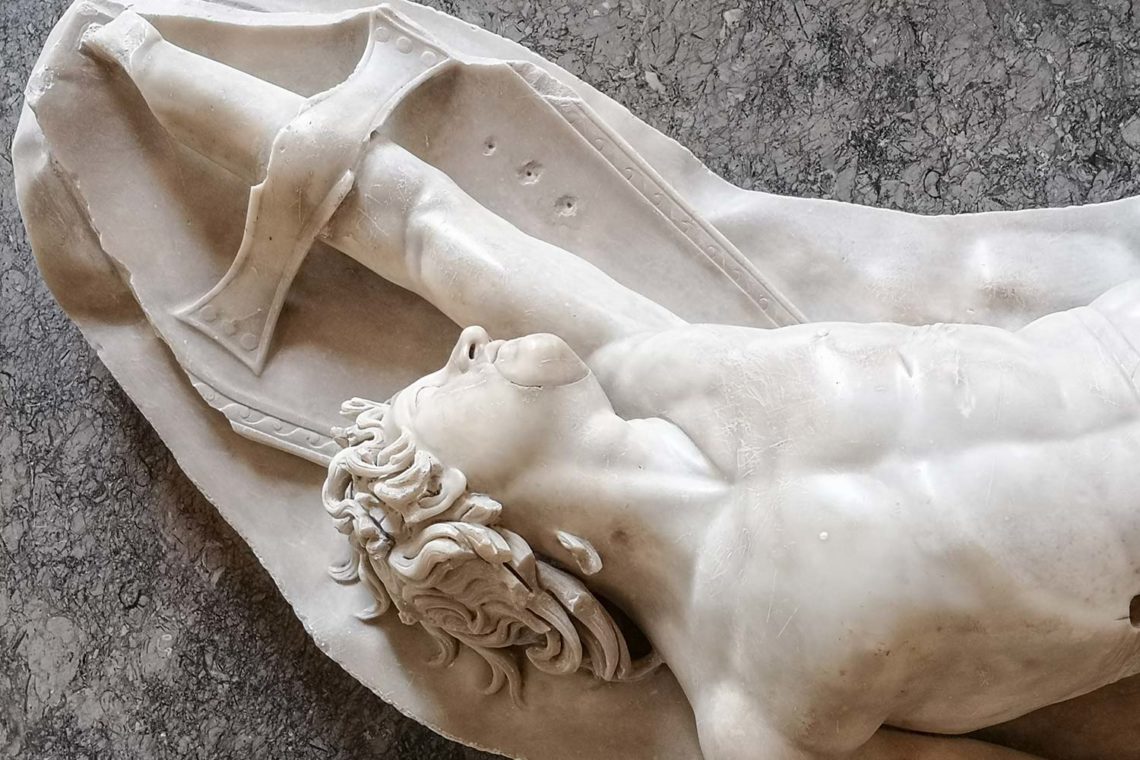 The Gauls in the Archaeological Museum of Venice

“A giant among midgets, I’ve walked into a battlefield. The fighting is almost over, and the massacre has begun”.
With these words Stewart (2004) begins the description of the Roman copies of the statues originally pertinent to the so-called Lesser Attalid Dedication on the Acropolis of Athens, now scattered in five cities including Venice. This explains the main reason for my visit today to the National Archaeological Museum of my city.

However, there is also another motive, more inherent in fruition. Due to the COVID-19 emergency, all the exhibition sites of the lagoon city are accessible in “droplet” mode (7 March 2020), that means with limited access in order to guarantee a safety distance (at least one meter) between each person. Anyway there is not a great need to filter the entrances, since the city is practically empty, but of course all the procedures are respected by the staff who promptly explains to the small bunch of visitors how to move between the rooms and what are the more suitable behaviors to follow during the visit.

During these difficult weeks (far from being left behind, as is evident from the new closings and restrictions in force since 8 March), the National Archaeological Museum of Venice has proved particularly active in the #museiaperti social initiative, experimenting with different ways of diffusing knowledge. The museum staff has therefore enhanced the dissemination of content through the Facebook profile – which I recommend you follow, this is the link – organizing visits to the collection in streaming.

Museum’s Room VIII is dedicated to Hellenistic sculpture and relief and, among other works, three statues stand out in the center, recognized – after various vicissitudes, we will see it later – as three Roman copies of the imperial age depicting Galatian soldiers (Gauls), a population of Celtic origin migrated to Asia Minor at the beginning of the third century. B.C.E.

Despite the Renaissance restorations, which probably altered some poses and gestures, the three sculptures fix, almost in a movie frame, several moments of a bloody defeat in battle: fear, loss of hope, death. In addition to the frightened expressions, the twisted poses and the almost morbid insistence on the most gruesome details, such as the bleeding wounds, immediately stand out. As Stewart suggested, it really feels like walking into a war field witnessing the massacre of the defeated. The reduced scale of the statues only increases, even involuntarily, a sense of superiority, even physical, compared to these dying people, the visitor is in fact wandering among them almost like a giant (always an intuition of Stewart) who looks at them from top to bottom. Some questions arise immediately. Where are the winners? Were their sculptures simply lost or not of interest to the collector? Are we just the witnesses of this bloodbath, from which we must learn something, or are we the guilty party of it? As we will see later, our doubts are due to the Romans, who have copied Greek originals but far from passively.

The dead Galata is perhaps the most pathos-charged sculpture of the trio. Lying on uneven rocky terrain, which forces the body to disarticulate in an even more convoluted position, this beardless young warrior is portrayed naked. The flowing and rebellious hair seem to remember Alexander the Great, the right arm, extended forward, still holds the shield, while the left hand holds what remains of the sword. Death has just occurred, since blood still flows from the wounds. The body was originally to be pierced by a metal rod, as can be deduced from the two holes at the height of the abdomen.

Here the soldier seems to be caught in the precise moment while succumbing to the enemy. The gaze turned upwards, probably in the direction of his executioner, reveals the moment in which he realizes that he cannot be saved. Unlike the other two statues, here the Gaul is dressed in a short tunic tied at the waist. The arms are Renaissance integrations and perhaps originally the right hand was holding the sword backwards, as the strange twist of the wrist seems to suggest. As for the sculpture of Palazzo Altemps pertaining to the Larger Attalid Dedication (even if the latter’s expression is more of pride than of dismay), Galata was therefore probably about to commit suicide (Coarelli 2014), or to invoke pity (Stewart 2004).

The twisted and dynamic pose, hence the affectionate name of “Breakdancer”, seems to portray the exact moment of the disastrous fall from horse of this young and naked soldier. However the Renaissance restorations have probably altered the pose and the attributes, thanks to iconographic matches, originally the left arm held a shield to protect the Gaul.

In 1514 – to remember that Laocoonte re-emerged in 1506 – Filippo Strozzi describes in a letter the sensational discovery of “circa 5 figure sì belle quante ne sian altre in Roma. Sono di marmo […] e sono tutti chi morti, chi feriti, pure separati. Evi che tien che sian la historia delli Horatii et Curiatii” (initially the group had been deemed pertinent to the myth of the Horatii and Curiazi), which came to light during the work of an unidentified monastery of the eternal city and promptly purchased by Alfonsina Orsini, mother of Lorenzo the Magnificent. From clues in the documentation it is clear that other sculptures, pertinent to the same set, were discovered in the same place, for a total of perhaps ten.

The three sculptures now in Venice appear for the first time in registers in 1523, on the occasion of the famous donation of Domenico Grimani’s collection which will give life, after many vicissitudes – see the article of the Accademia degli Incerti and the Palazzo Grimani collection – at the Public Statuary of the Serenissima (the nucleus of the current archaeological museum), but it seems rather certain that the Venetian collector had purchased them from the same source as Alfonsina Orsini (Coarelli 2014).

I quote once again Stewart about the role that these works played on Renaissance art, with the advice of course to read his 2004 contribution: “[t]hey represented the raw material for Renaissance world making”, a consideration that immediately reminds me of Bing’s comment on Warburg’s precious work: “He thus found that the artists or their patrons and learned advisors, when choosing their models, were not concerned at the forefront of the content of ancient works, but of their mimic language” (Bing 1960). As the coordinators of the Mnemosyne seminar write: “In Warburg’s critical intuition, the Renaissance recovery of the ancient does not end in the mere recognition of an aesthetic or content authoritativeness of the models, but revives antiquity in primis for its expressive value”. The ancient is therefore rediscovered and certainly used as a source of models, but it also becomes the raw material essential for the creation of something absolutely new that did not exist before.

Some essential historical notes: Attalos I, king of Pergamum, is best known for his victory of 237 BCE. ca. against the advance of the Galatians, celebrated in a grandiose way by the monuments erected in its capital. In 200 BCE. the ruler rushed to Athens’ aid, protecting it from the Macedonian threat that was “threatening its utter annihilation just like the barbarous Amazons and Persian had done” (Stewart 2004). Attalos I was then celebrated as a hero of Athens and a new tribe was established with his name. Even his successor, Attalos II, continued to take an interest in Athens sponsoring the construction of the homonymous stoà at the agorà.

“By the south wall are represented the legendary war with the giants, who once dwelt about Thrace and on the isthmus of Pallene, the battle between the Athenians and the Amazons, the engagement with the Persians at Marathon and the destruction of the Gauls in Mysia. Each is about two cubits, and all were dedicated by Attalus.”

Pausanias is the only source to testify to the presence on the Acropolis (Athens) of a group, rather complex and articulated, of bronze statues dedicated by a king Attalos (the attribution to Attalos I or II is not yet fully resolved) and depicting themes of both the Greek and the Pergamene traditions. The common thread that connects the four themes is the confrontation-clash with the other, with what is not Greek, combining the myth with more properly historical facts. Gigantomachy, Amazonomachy, Persianomachy and Galatomachy follow one another in a sort of “chronological” order.

The investigations conducted at the Acropolis since the Nineties have allowed Manolis Korres to connect a series of marble bases to this monument. The articulation of the blocks and the evidence of anchoring systems for bronze statues, are fully compatible with a monumental structure composed by four long bases, as Pausanias suggests, which housed sculptures the size of the current Roman copies.

“Despite its modern nickname, then, the Attalid Dedication apparently was huge: the longest Hellenistic free-standing sculptural monument yet known, lining almost the entire available space between the Parthenon and the eastern corner of the citadel”

Where are the winners?

It seems very probable that the Attalid Dedication on the Acropolis of Athens included not only the losers, but also the winners. The message of supremacy (moral, cultural, etc.) of Greekness over the barbarian could not be effectively conveyed otherwise, as evidenced by the tradition of sculptural decoration, especially of the greek temples. However, the Roman copies survived are all pertinent only to the losers and, as emerges from Stewart’s analysis, it does not seem to be a fatality: “[i]n imperial Rome the elimination of the victors ostensibly removed the eros-laden glance entirely [… and] effectively reunifies the gaze and decisively realigns the spectator with it. Scrutinizing these tortured little bodies, he channels the unseen majesty of the emperor and the res Romana”. (Stewart 2004).

The Roman copies, therefore far from being mere reproductions, give voice to new messages and incorporate new meanings very different from the Greek originals. This blog is not the right place where talk about the problems inherent in the dating and the different hypotheses regarding the origin of the Roman sculptures, for which I invite you to deepen on the contributions of Stewart and Coarelli.